Trapped on Lesbos: the child refugees waiting to start a new life 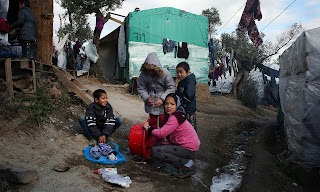 Outside the Moria refugee camp in Lesbos, a shanty town made of tarpaulin strung between olive trees is getting bigger every week. There are now 18,000 people living in this second camp, designed for just over 2,000.

Ahmed (not his real name), 17, and his friend Musa wind their way up muddy tracks towards their tent, swerving to avoid groups of children running in flip-flops through the dirt.

The boys have made their home under plastic and they want to show us how they are living, huddling in a group of three to keep warm. Ahmed has been here since October, when he arrived from Syria expecting to move quickly onwards.

Although he knew nothing of the laws on family reunion when he set out from his village near Aleppo, Ahmed knows now that his family in the north of England – a brother and cousin who are desperate to give him a home – are his only hope of escaping Moria. But he is worried. “It is so slow, and I know if we do not get into the system quickly it might not happen.”