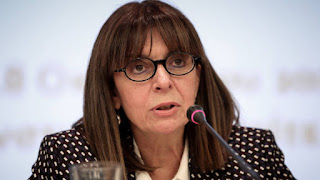 Katerina Sakellaropoulou, a senior Greek judge, has won the overwhelming backing of MPs to become the county’s first female president.

The 63-year-old head of the state council, Greece’s highest court, was supported in a vote by 261 deputies in the 300-seat parliament, after securing endorsements from the ruling centre-right New Democracy party of prime minister Kyriakos Mitsotakis and the leftwing opposition Syriza.

The prime minister’s decision to nominate Ms Sakellaropoulou, rather than backing a second term for president Prokopis Pavlopoulos, threw down a challenge to the overwhelmingly male members of Greece’s parliament, many of whom hold deeply conservative attitudes towards women.

“I think it’s time the country had a distinguished woman in the highest state role,” Mr Mitsotakis said ahead of her appointment. “Let’s not try to ignore it: Greek society still discriminates against women. This is going to change, starting from the top.”