The Greek Debt Crisis: No easy way out 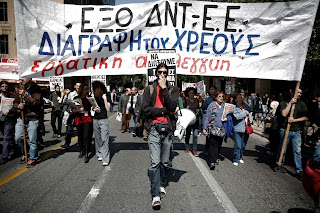 After World War II, farsighted European leaders sought to overcome centuries of hatred and warfare by striving step-by-step toward economic and political integration. Today an ongoing economic crisis in Greece poses a grave threat to that vision, bearing major lessons for the future of global economic cooperation.

Europe’s postwar drive toward unity began with the removal of tariff barriers and proceeded with harmonizing regulations and making it easier for people to move across the region. The European Union (EU), a quasi-political confederation that allowed for the free movement of goods, capital, services, and people, was launched in 1992.

But the introduction of a common currency, the euro, in 1999 proved to be Europe’s riskiest step. (The euro is the official currency of 19 of the 28 EU member countries.)

A decade after the euro was introduced, an unforeseen financial crisis engulfed Europe. It came in the form of a global financial shock that started in the United States after the failure of Lehman Brothers. Major European banks and economies suffered.

One country, Greece, plunged into virtual bankruptcy. In 2015, its leaders threatened to exit the euro. That step might have unraveled the common currency altogether and undermined the “European project,” which took decades to build. The debate over Greece’s threat revived long-dormant nationalist tensions throughout Europe.

Today Greece’s economy has stabilized and is slowly recovering. But the huge debts owed by Greece to the rest of the euro area cast a shadow over its future and the future of the European project. The Greek populace has suffered painful budget cuts, tax increases, high unemployment, and shrunken living standards and social services. Many still fear their future.