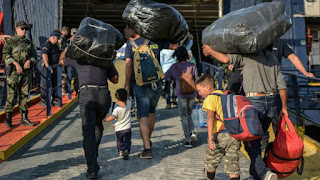 Greece has launched an urgent effort to move hundreds of asylum-seekers from a heavily overcrowded island camp as fears rise of a further influx of people fleeing a Turkish clampdown on migrants and the long-running war in Syria.

Athens started to take people on Monday from the Moria facility on Lesbos, which has drawn criticism over its dismal conditions as it ballooned to more than three times its roughly 3,000 capacity.

The effort comes as worries grow that more asylum-seekers could head to the Greek islands in the face of a Turkish crackdown on undocumented migrants and a Russia-backed military offensive to retake the rebel-held enclave in north-western Syria’s Idlib province.

More than 600 asylum-seekers from the Moria camp on Lesbos boarded a specially chartered ferry on Monday on their way to a camp in northern Greece as the government began implementing emergency measures to relieve overcrowding in reception centres on the east Aegean Islands.