The move, which was proposed last month by the country’s central bank, was agreed with the Single Supervisory Mechanism, the European Central Bank’s banking supervisory agency, Mr Staikouras said.

“Restoring free movement of capital will contribute significantly to strengthening confidence [in Greece] and attracting investments . . . and will lead to further upgrades of the country’s credit rating,” he said. 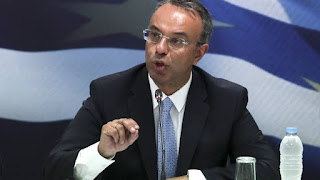 Greece’s new finance minister has said that implementing sweeping tax reforms will be his “key priority” as his country seeks to boost growth and rebuild credibility with investors following a decade of international bailouts backed by the EU and IMF.

Christos Staikouras told the Financial Times that the centre-right New Democracy government is planning “a comprehensive tax reform that will have a four-year horizon and will accelerate growth”.

“The fundamental objective is to achieve sustainable high growth rates so as to gradually restore the country’s lost wealth,” Mr Staikouras said in his first interview with a foreign media outlet since he took office after last month’s election.