The end for Alexis 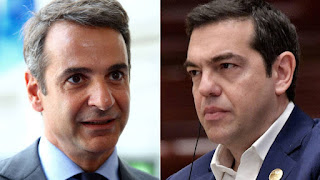 It’s almost unheard of for Greece to hold an election in July and Kyriakos Mitsotakis, leader of the centre-right New Democracy party, is worried that his voters may decide to head for the beach instead of the ballot box.

At every campaign appearance, from neighbourhood café debates to television interviews, Mr Mitsotakis makes a point of reminding conservatives they should turn up to vote in the country’s general election on Sunday.

Opinion polls suggest he doesn’t need to fret. Almost every published poll during the campaign has given ND a lead of between 7.5 and 10 percentage points over the ruling leftwing Syriza party of Alexis Tsipras, Greece's current prime minister.

If the polls are right, the conservatives would score an outright majority, winning between 153 and 164 seats in the 300-member parliament.