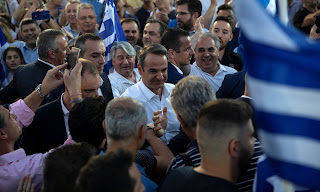 As the sun sets over the Acropolis, bathing the monument in the gentle light of a dying day, Kyriakos Mitsotakis ascends the podium, punching the air in jubilant mood. The backdrop may be antiquity’s most famous site but before him is a sea of blue and white, the colour of the Greek flag being waved by the crowd.

Three days before snap elections, the opposition leader is on a roll. Democracy can produce unexpected results but every analyst agrees this is an election of foregone conclusion.

All polls point to victory for Mitsotakis’s centre-right New Democracy, with most suggesting the party is on course to win an outright majority in what would be a significant shift for a country governed by fragile coalitions for the past decade.

On Thursday, a Pulse survey showed the conservatives leading the leftist Syriza by eight percentage points. If so, New Democracy would acquire between 155 and 159 seats in the 300-seat parliament repeating its spectacular performance in the European election in May which prompted the prime minister, Alexis Tsipras, to call the vote three months ahead of schedule.