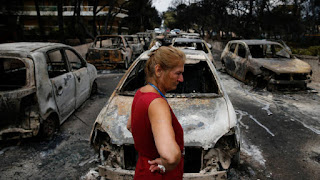 In a defiant general election campaign that ends on Saturday, Greek prime minister Alexis Tsipras has robustly defended some divisive decisions taken over more than four years in power — from a treaty struck with North Macedonia to pension reforms agreed with the country’s bailout creditors.

But Mr Tsipras has been far less comfortable on one issue that is adding to public discontent and his likely crushing defeat on Sunday: his government’s response to a devastating inferno in July 2018 at Mati, a summer resort near Athens.

High winds drove a fire that caused 102 deaths, the worst recorded toll in a Greek wildfire. Two inquiries by Greek prosecutors and international disaster prevention experts pointed to a fatal lack of co-ordination between emergency services.

As the election campaign drew to a close this week Mr Tsipras —whose Syriza party is around 8 percentage points behind the opposition centre-right New Democracy in polls —was asked again about Mati in a television interview. He sparked a storm of tweets demanding he apologise publicly for the government’s chaotic reaction after he tried to fend off questions and said officials at first failed to inform him about casualty numbers.