Let down by government, Greek voters expected to replace Tsipras with centre-right 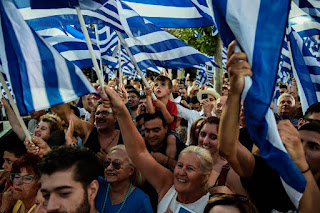 There’s a general election in Greece on Sunday but, aside from a few roadside posters, it would be easy for visitors to pass through without realising.

In contrast to the huge demonstrations that were broadcast on news stations around the world when the current ruling party – radical leftists Syriza – swept to power in 2015, everything feels remarkably subdued.

The current government, lead by charismatic Alexis Tsipras, rose to power with a populist, anti-establishment message several years into the financial crisis that has engulfed Greece for a decade.

However, he disappointed many of his supporters when he ignored the results of a referendum on a bail-out package and adopted the same austerity policies he had previously stood against. Now it looks as though the country’s traditional centre-right party, New Democracy, will take power, having won the highest vote share in the recent European and local elections.

“Syriza supporters are disappointed, New Democracy voters are not too enthusiastic about voting New Democracy, and everybody knows the result already,” said Aris Hatzis, a political commentator and professor of philosophy and law at the University of Athens.

“The only question is whether they will get a majority or form a coalition government.”