In Greece, politics is a family affair 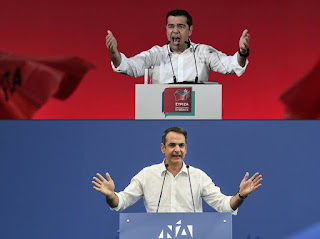 There may be no better place to understand Greek politics than the region of Achaia. Perched at the top of the Peloponnese peninsula west of Athens, it’s home to the country’s third-largest city — the bustling port city of Patras, famous for its annual Carnival parade, with its colorful costumes and floats.

It’s also the setting of a showdown between Prime Minister Alexis Tsipras, the head of the radical-left Syriza party, and the man who will almost certainly become the Greece’s next prime minister, Kyriakos Mitsotakis, leader of the center-right New Democracy party.

In last month’s European Parliament election, Achaia — a Syriza stronghold — was one of just two constituencies in the country where New Democracy didn’t rake in the most votes. As Greeks return to the polls to elect a new government Sunday, Tsipras and Mitsotakis have both decided to lead their tickets in the region.

The outcome of the contest will determine not just Greece’s direction over the next four years. It will likely see the restoration of one of the country’s most powerful political families — after more than a decade of political and economic turmoil following the onset of the 2008 financial crisis.

More
Posted by Aristides N. Hatzis at 7:55 AM