Has Greece found the formula for defeating populism? 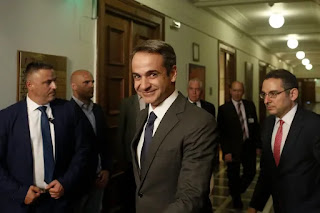 Greece has a new prime minister. Kyriakos Mitsotakis took office immediately after leading his conservative New Democracy party to a landslide victory in the country’s general election on July 7. His dramatic victory ended 4½ of government by Alexis Tsipras and his far-left Syriza party. And that’s why the significance of this election extends well beyond Greece: Mitsotakis has shown how a traditionally oriented party can take on populists — and defeat them.

Syriza’s left-wing populism was based mostly on anti-market bias, a bit of technophobia and a strong measure of social envy. This kind of populism can be defeated relatively easily in liberal democracies — simply because the numbers don’t add up. That leaves a government of the type led by Syriza with two options: it can either succumb to its own anti-establishment paranoia or opt for pragmatism. Tsipras ultimately tried both, neither very convincingly. The voters didn’t appreciate the blatant contradiction and grew impatient with the anemic growth. In the end, they abandoned him for Mitsotakis, the quintessential anti-populist.

The first blow to Tsipras came after an ill-advised referendum in 2015 when Greek voters, reeling from the country’s financial crisis, had the chance to take a stand on a proposed European Union bailout package. (Sixty-one percent voted “no.”) Tsipras’s plans failed miserably, and the episode transformed the prime minister from a radical naysayer into a compliant enforcer of the E.U.'s tough conditions. He ended up resorting to a left-wing populist ploy: hitting the middle class with tax increases to offer handouts to groups he groomed as his core supporters. This small-scale redistribution was not as successful as he hoped. The fierce backlash from middle-class voters led to his eventual demise.