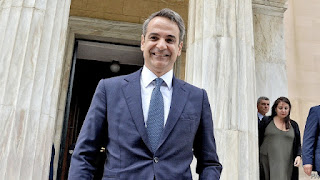 Over the past decade Greece has not been the easiest place for politicians who want to be liked by voters. The newly elected centre-right government is trying its best. In his first few weeks in office Kyriakos Mitsotakis, the prime minister, has announced tax breaks for ordinary Greeks as well as for corporations. He has promised not to cut social benefits or fire any public-sector workers. Jobs are being created in areas that suffered deep cuts during the country’s eight-year crisis: the health ministry is preparing to hire 2,400 hospital workers and another 1,500 police officers are being recruited.

Sadly, the good times are not guaranteed. The prime minister’s policy choices could derail Greece’s chances of hitting tough budget-surplus targets set by its creditors, the European Union and the International Monetary Fund. Economists fear that the relatively inexperienced Mr Mitsotakis—he held a fairly junior ministerial post from 2013 to 2015—may be overestimating his government’s capacity to shake up the country’s sleepy bureaucracy and push through reforms.

So far the markets have given Mr Mitsotakis and his New Democracy party a vote of confidence. On July 16th Greece issued its first seven-year bond since 2010. A modest target issuance of €2.5bn ($2.8bn) was hugely oversubscribed: offers exceeded €13bn, pushing down the yield on the new bond to 1.9%. Greece now borrows at the same rate that Italy does.

Winning over the EU and the IMF will be harder. Asked about the new Greek government at her annual summer press conference, Angela Merkel, the German chancellor, called the bond issue “very positive” but sounded a note of caution: “We will have to see how things evolve.”

More
Posted by Aristides N. Hatzis at 9:34 AM