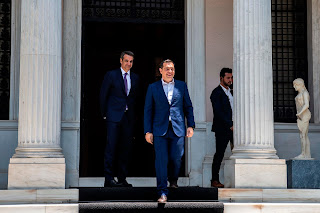 With a quiet handshake at the door of Maximos Mansion on a tree-lined street in central Athens, Alexis Tsipras ceded the office of prime minister on Monday to the New Democracy leader, Kyriakos Mitsotakis.

It was the kind of uneventful handover of power that heralded Greece’s return to normality after being ground zero of one of the most tumultuous periods in global economic history.

The election victory on Sunday by a traditional center-right party was the end of Greece’s flirtation with radical left-wing populist politics, even as the radicals of Mr. Tsipras’s Syriza party transformed themselves into a mainstream force of the center-left.

The Tsipras experiment may hold important lessons for Europe and its new ranks of anti-establishment populists. While many, as in Italy, gleefully thumb their noses at the European Union and its rules, once in power the risks of following through on their rebelliousness may corral them from the extremes.