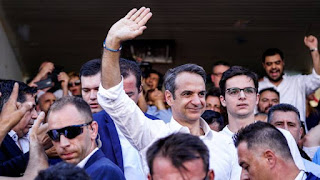 The traditional centre-right party is set to regain power in Greece after a sweeping general election victory, raising hopes of a return to growth and stability in a country rocked by years of recession and three international bailouts.

Kyriakos Mitsotakis’s New Democracy party was forecast to win 38-42 per cent of the vote, according to exit polls, compared to 26-32 per cent for the leftist Syriza party of Alexis Tsipras, the prime minister.

The result is a heavy blow for Mr Tsipras, the one-time radical firebrand who abruptly reversed his policy stance and adopted a harsh austerity programme in return for an €86bn bailout after Greece came close to crashing out of the eurozone in 2015.