Greece Is the Good News Story in Europe 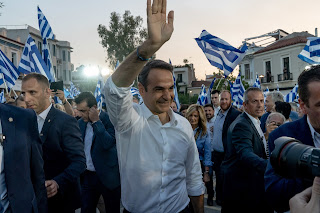 If you’re looking for an optimistic story in Europe, try Greece. Yes, you read that right. Having lost a quarter of its economy in a devastating recession, Greece has turned the corner, its democracy intact, its extremist temptations defeated and its anti-Americanism defunct.

The landslide election on Sunday of Kyriakos Mitsotakis, the dynamic leader of the center-right New Democracy party, marked the end of a chapter. Greece rejected Alexis Tsipras, the leftist leader who took the country to the brink of ruin in 2015 before discovering a pragmatic streak. It also voted the neo-Nazi Golden Dawn out of Parliament. At the height of the crisis, Golden Dawn had become the country’s third-largest party.

First into populism, Greece is now first out. For a country in free fall, the anchors of the European Union and NATO are not so negligible after all. Europe is not simply a story of growing nationalism and xenophobia. It’s a continent in violent flux, torn between liberal democratic and nativist currents.

Despite unemployment that reached almost 30 percent, a chaotic near-exit from the euro, huge bailouts to save it from bankruptcy, mandated austerity programs and a wave of desperate refugees from Syria, Greece stabilized itself. It’s a reminder that reports of democracy’s demise are exaggerated.