European democracy began in Greece. Thanks to its voters, it won’t die there. 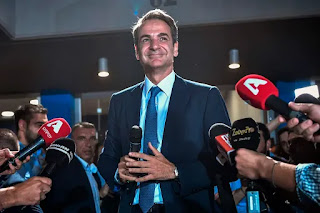 European Democracy began in Greece; some say it almost ended there, too. About a decade ago, as the world reeled from the financial crisis, Athens’s official financial data were shown to be badly misstated. In truth, the country was nearing insolvency, with potentially catastrophic consequences not only for Greece but for the 18 other countries that use the common currency, the euro. As the country spiraled into depression and chaos, it seemed ripe for the taking by extreme populists of the right and left. And, indeed, a far-left political neophyte, Alexis Tsipras, did win the prime ministership in 2015, promising to defy Greece’s international creditors and carry out revolutionary change.

Last Sunday, however, Greek voters went peacefully to the polls and calmly but decisively voted Mr. Tsipras and his party out, in favor of the center-right New Democracy party headed by Kyriakos Mitsotakis. Overall, it’s a soft political landing for Greece, with hopeful implications for the resiliency of Greek, and European, democratic culture.

To give Mr. Tsipras his due, he eventually abandoned radical policies in favor of the only realistic option: acceptance of a long-term bailout from German-led creditors, which required strict debt-control measures and a prolonged recession but did enable Greece to maintain the euro. Today, Greece’s economy is 24 percent smaller than it was in 2007, but it has at least resumed growth and job creation, modest though they may be.