Europe Tamed a Populist and Now He’s Paying the Price 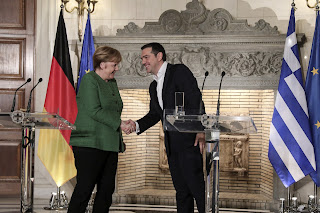 Michalis Asikis and his brother aren’t your typical shoe-store owners, at least by most standards. One uses time away from the shop to teach at a music school while the other heads off to taxi tourists.

In Greece, though, scratching a living from multiple sources isn’t unusual nowadays. The struggle to make ends meet or keep businesses on life support has become the norm for many Greeks, despite the promise by Prime Minister Alexis Tsipras that “hope is coming” when he surged to power in 2015. Indeed, to avoid shuttering his store in the northern town of Florina, Asikis has resorted to borrowing from family.

“People believed in Tsipras’s central slogan and not only didn’t hope come, there was also great disappointment,” Asikis, 47, says at his outlet on Florina’s main commercial street, which is littered with empty stores. “It’s like telling a kid that you will get them an ice cream and ending up giving them nothing, not even chewing gum.”

Such disillusionment is the harsh reality for Tsipras as he heads into elections on Sunday. While he managed to restore faith in Greece internationally, he lost it at home as his fresh face came to represent more of the same to a jaded nation. Opinion polls show power is likely to return to New Democracy, one of Greece’s two traditional parties of government, and back to the dynastic politics that Tsipras and his Coalition of the Radical Left vowed to break.