Mitsotakis buoyed by Greeks’ desire for change after Syriza era 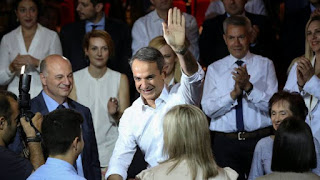 Not so long ago the staunchly leftwing Athens neighbourhood of Petroupolis would have been hostile territory for Kyriakos Mitsotakis.

But when the leader of the centre-right New Democracy party campaigned in Petroupolis last week, he found enough support to be confident heading into Greece’s July 7 election.

“I’ve decided to take a chance on ND,” said Stamatis, a 28-year-old computer technician, who voted for prime minister Alexis Tsipras and his leftist Syriza party in 2015. “They promised to roll back austerity — but what we got was four more tough years and a slew of tax increases.”

Nektaria, 23, said she “wants to believe” the conservatives can deliver a better standard of living. “My parents don’t share my opinion but I think ND will try harder than Syriza did,” she said, as she pushed her two-year-old daughter in a stroller.

More
Posted by Aristides N. Hatzis at 7:58 AM 0 comments

Greece is facing a snap general election after prime minister Alexis Tsipras and his ruling Syriza party suffered a heavy defeat in voting for the European Parliament last month.

The vote will be held on July 7, almost four months before the leftwing Syriza government’s term was due to expire. Mr Tsipras tendered his resignation to President Prokopis Pavlopoulos on Monday, saying the country had “entered a prolonged pre-electoral period from the day after the European elections.”

“I believe this could presage risks for the smooth course of the economy . . . endangering the virtuous circle we have entered and the sacrifices the Greek people have made,” he said.

The European Commission warned last week that handouts legislated by the Syriza government ahead of the European vote could derail Greece’s target for a primary budget surplus — before debt servicing costs — of 3.5 per cent of gross domestic product for this year.