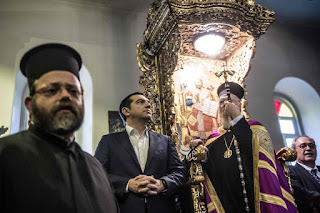 American presidents, religious freedom advocates, the European Union and Orthodox Christian leaders have for years issued desperate appeals to Turkey’s government to reopen a shuttered Greek Orthodox seminary on an island off Istanbul, but to no avail.

Before it was closed in 1971, the Theological School of Halki stood for more than a century as the primary center of scholarship and clerical training for generations of Greek Orthodox leaders. Now, stripped of its educational role, its classrooms — emptied by arguments over politics, nationalism and minority rights — are kept pristine in the stubborn hope the students will someday return.

The latest attempt to sway the Turkish government has come from Greece’s prime minister, Alexis Tsipras, who called this week for the seminary to be reopened during a two-day visit to Turkey. His cordial meetings with Turkish President Recep Tayyip Erdogan — despite a long history of conflict between the two nations and worrying recent flare-ups — has raised hopes among Orthodox leadership and members of Turkey’s ethnic Greek minority that a resolution to the deadlock over the seminary may finally be at hand.

More
Posted by Aristides N. Hatzis at 7:01 AM