How Greece's PM hopes to solve his election riddle 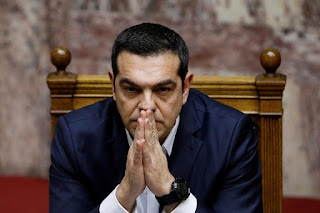 Prime Minister Alexis Tsipras has been implementing his re-election strategy to the letter over the past six months, steering Greece out of a humiliating bailout and resolving a decades-old dispute with neighboring Macedonia.

So far, it isn’t paying off. With a general election no more than eight months away, his Syriza party is far behind in opinion polls.

That is despite two signature projects since last summer, evidence that the economy is climbing out of years of depression and willingness at last among investors to lend.

Tsipras was elected as a firebrand leftist in 2015 on a promise to reject the austerity required in the bailout.

He later caved in to the lenders’ demands and has reinvented himself as a conformist. Now, after years of austerity many ordinary voters cannot afford to keep the lights on, others are deeply indebted, and almost one in five Greeks is unemployed.