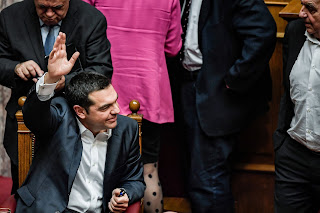 by Eleni Chrepa and Sotiris Nikas

Greek Prime Minister Alexis Tsipras saw off the latest challenge to his government, winning the fourth confidence vote of his term in office. Now comes the hard part.

After surviving a confidence motion late Wednesday with 151 votes in Greece’s 300-seat chamber, the 44-year-old premier needs to figure out how to ratify a landmark accord with the neighboring Republic of Macedonia, after his coalition partner pulled out of the government in protest over the deal.

While the vote allows Tsipras to extend his stay in power until September, when his term ends, he may find it difficult to legislate with a minority government. He will again need support from 151 lawmakers to approve the so-called Prespes agreement, which ends a decade-long dispute by allowing Greece’s northern neighbor to call itself Republic of North Macedonia.

“This is a Pyrrhic victory for the government,” said Aristides Hatzis, a professor of law and economics at the University of Athens. “The good thing is that before its fall, the government majority will pass the Prespes agreement. It is an agreement which has been justly criticized, has many weaknesses, however, it is a rather decent and fair compromise which will benefit Greece in the long run.”