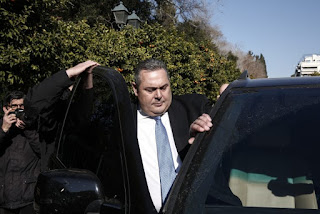 Like many Greeks worn down by more than 8 ½ years of an economic and austerity crisis that has decimated so many lives, Efrossini, a 56-year-old private class English teacher, was less than interested in the breakup of the country’s coalition and what elections this year might bring.

“It doesn’t matter to me anymore because whatever the promises that have come from SYRIZA it has never come true,” she told The National Herald, sounding the kind of apathy that seems to have settled like a shroud over so many who believe their lives won’t get better no matter who wins.

The ruling Radical Left SYRIZA came to power in January, 2015 on the back of anti-austerity promises only to see Prime Minister promptly renege and bring in an ideological enemy, the far-right Independent Greeks (ANEL) to have enough votes to control Parliament.

That blew up when ANEL leader Panos Kammenos stepped down as Defense Minister and took his party out of the government in apparent protest over a deal the anti-nationalist made with the Former Yugoslav Republic of Macedonia (FYROM), giving away the name of an ancient Greek province.