How Greece’s Alexis Tsipras went from firebrand to statesman 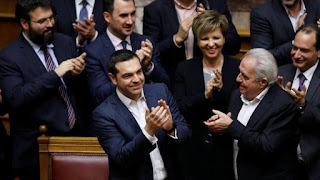 Alexis Tsipras, Nobel laureate? The idea being touted for Greece’s prime minister by some of his senior officials might seem far-fetched. But Mr Tsipras can certainly expect international acclaim if, as expected, Greek MPs ratify a deal to end one of Europe’s longest bilateral disputes.

In a knife-edge vote, Greece is poised to sign off on Thursday on a plan for its neighbour, officially the Former Yugoslav Republic of Macedonia, to change its name to “North Macedonia”. Zoran Zaev, the Macedonian premier, has already won his parliament’s approval for the arrangement, which satisfies Athens by dropping an implied claim on the Greek region of the same name. The deal is strongly backed by the EU and Nato, which want to bring Macedonia into the western orbit.

Even if the Nobel committee does not consider Mr Tsipras and his Macedonian counterpart, the 44-year-old Greek prime minister is barely recognisable as the leftwing firebrand who threatened to denounce Greece’s eurozone bailout, ban German politicians from visiting Athens and pull the country out of the euro if its creditors rejected his demands for debt forgiveness.

More
Posted by Yulie Foka-Kavalieraki at 7:00 AM