Greece's Tsipras on the Brink as Confidence Vote Looms This Week 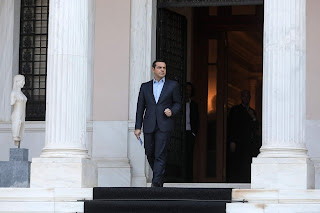 In the euro area’s latest sign of political instability, Defense Minister Panos Kammenos withdrew his party from the governing coalition on Sunday over a name dispute with neighboring Macedonia. Lawmakers in Athens tentatively planned to hold the confidence vote on Wednesday, months before regular elections are due in September.

“An early election is good news for investors,” said Wolfango Piccoli, co-president of London-based consultants Teneo Intelligence. “The country has been in a election campaign mode for weeks, and the sooner the elections take place the better.”

The survival of Tsipras, who led Greece through high-drama moments of Greece’s bailouts and forged an unlikely bond with German Chancellor Angela Merkel, may depend on whether Kammenos’s Independent Greeks lawmakers stay united against him. Tsipras, 44, may also seek support from other parties and independent lawmakers to avoid an early vote.