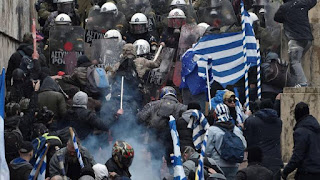 Greece’s minority government kicks off its bid to ratify a historic accord with its neighbour, the Former Yugoslavia Republic of Macedonia, on Monday as the two states seek to put one of the Balkans’ longstanding disputes to rest.

Ratification for the deal to rename the country “North Macedonia” would pave the way for Skopje’s accession to the EU and Nato.

Alexis Tsipras, Greece’s prime minister, faces deep opposition over a compromise that many of his compatriots think endangers the territorial and cultural integrity of their own country. But he is expected to scrape together a slim majority on Friday at the end of a mammoth five-day parliamentary debate.

The government, which controls only 146 seats in the 300-member parliament, now appears to have the support of at least six lawmakers from several small parties, including two rebels from Mr Tsipras’s former coalition partner, the rightwing Independent Greeks party, which opposes the agreement with Skopje.