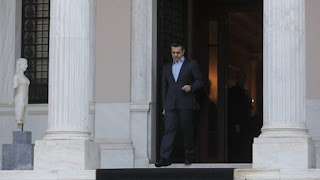 Alexis Tsipras, the Greek prime minister, faces a confidence vote in parliament next week after the ruling Syriza party’s coalition partner announced it was pulling out of the government.

The move by Independent Greeks (Anel), a small rightwing nationalist party, had been expected since Panos Kammenos, the defence minister and Anel leader, declared his opposition to Greece’s naming deal with neighbouring Macedonia.

Mr Kammenos’s decision to leave the four-year-old coalition came after the Skopje parliament voted on Friday to approve constitutional changes renaming the country North Macedonia and opening the way for it to begin talks this year on joining Nato and the EU. The deal has still to be ratified by the Greek parliament.

“The issue of Macedonia is such that I can’t avoid stepping down from my cabinet post,” Mr Kammenos said after meeting with Mr Tsipras at the premier’s office on Sunday.