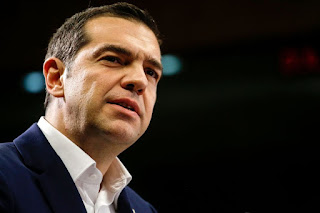 Greek Prime Minister Alexis Tsipras, who’s survived multiple elections, a disastrous referendum and previous confidence votes, will put his resilience to the test in a new confidence motion in parliament Wednesday, after his coalition partner withdrew support over a deal with the Republic of Macedonia to resolve a dispute about its name.

1. Will Tsipras survive the confidence vote?

Tsipras needs 151 votes in Greece’s 300-seat chamber to assure his government’s survival. With his Syriza party’s 145 seats, plus four likely votes from rebel members of ex-coalition partner Independent Greeks, one from independent lawmaker Katerina Papakosta and one from Potami lawmaker Spyros Danellis, it looks like Tsipras has the numbers, barely, to keep his administration going.

2. What happens if he loses?

If Tsipras fails to garner enough support, the pressure will be on to call new elections, though a new vote is not triggered automatically in the event of a defeat on a confidence measure. Tsipras maintains that he won’t call a new election before the government passes legislation including protections for homeowners and a higher minimum wage.