Athens in Pieces: The Art of Memory 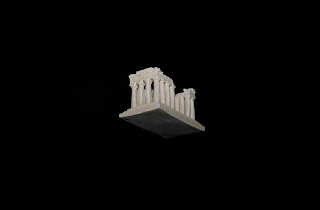 There is an ancient tradition relating to the art of memory, which legend says began with the poet Simonides of Ceos (556-468 B.C.E.). Simonides was giving a recitation in the dining hall of the house of Scopas, a Thessalian nobleman, when he was called outside because two strangers wanted to speak to him.

When the poet exited, the strangers were nowhere to be found, and the dining hall suddenly and violently collapsed. Scopas and his guests were crushed to death and disfigured beyond recognition. But Simonides was able to identify each of the corpses by remembering the precise place where they were sitting or lounging before the calamity.

With this association of memory with place, or “topos,” the idea of mnemotechnics, or the art of memory, came into being. In order to recall something, one has to identify a locus either in the interior palace of one’s memory or by constructing an exterior, physical memory theater. Various attempts to build such memory theaters punctuate antiquity. It is a practice picked up again in the Italian Renaissance and continued into the architecture of Elizabethan theater — like Shakespeare’s Globe — and beyond.