What's Wrong With Greek Banks and How It Can Be Fixed 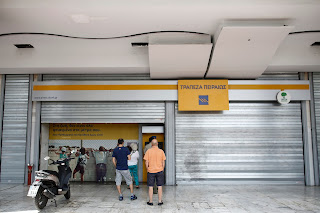 Burdened by the highest ratio of bad loans in Europe, Greek banks have no shortage of challenges. And that was before Greece -- the continent’s most indebted state -- decided to end its bailout program in August without requesting a follow-up lifeline backed by European creditors. If doubts about the state of their balance sheets aren’t addressed, concerns about the fate of Greek banks could spiral out of control. That became clear this week when banking shares plunged, though news that the government is weighing plans to help lenders speed up bad-loan disposals arrested the declines.

It’s tried. This summer Greece graduated from its third international rescue program and reached a landmark deal with Europe’s other governments that gives it a decade or more to start repaying most of its loans (with the understanding it won’t go back to the spending that brought its economy to the brink of collapse in 2009). The nation’s largest banks have been recapitalized three times since the start of the debt crisis -- most recently in 2015. The state, which has chipped in almost 50 billion euros to shore up capital over the past decade, says its banks are now well-capitalized and poised to gain from a nascent economic rebound. It also says that the banks have now new tools at their disposal to resolve the bad loans issue, including easier out-of-court settlement procedures and e-auctions.