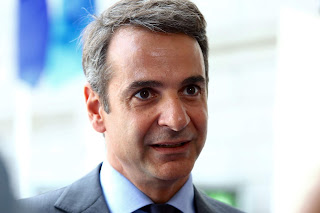 Kyriakos Mitsotakis says he’s a man with a mission.

The leader of New Democracy, currently Greece’s main opposition party -- who will become prime minister if his party wins general elections next year -- says what the country needs more than anything else is investment. With that in mind, he says he will issue permits for the mining project in Skouries, northern Greece, in his very first month in office and push for the development of the site of the former Athens Airport of Hellinikon.

The top priority would be to “unblock important and symbolic investment projects” the 50-year-old said in an interview in his spacious, bright office on a busy Athens street. “One way or another, Hellinikon must get off the ground in 2019. This project must not be delayed, not even for a minute longer. Hellinikon is the most emblematic of the big investments in the country. It’s all about the new Athens.”

The projects are together valued at about 11 billion euros ($12.7 billion) and have been stalled for years in legal and bureaucratic red tape in Greece, where luring investments has become critical to reviving an economy that lost about 25 percent of its gross domestic product during its almost decade-long crisis.