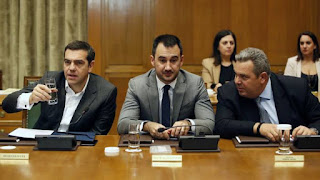 A stand-off between nationalists and leftwingers in Greece’s fragile coalition government is undermining prospects for settling a three-decade-long dispute over Macedonia’s name, which has blocked the Balkan country’s path towards membership of Nato and the EU.

The leftwing Syriza party of prime minister Alexis Tsipras strongly supports a deal signed with Skopje in June, which removes Athens’ concern that the term Macedonia implies a territorial claim on the Greek region of the same name.

But Syriza’s coalition partner, the rightwing Independent Greeks, has threatened to pull out of government over the Prespa agreement, named after the Balkan lake where it was signed.

Panos Kammenos, the outspoken defence minister and the party’s leader, said last week: “‘North Macedonia’ [the country’s proposed new name] for us is the last straw.”

“We will not accept the term Macedonia, we will walk out of parliament if Syriza presents the agreement [for ratification].”