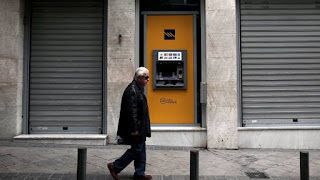 Some of Greece’s biggest banks suffered steep share price falls on Wednesday as investors worried they may not have enough capital to meet fresh targets on reducing their large portfolios of bad debts.

Shares in Piraeus Bank, the country’s largest lender by assets, dropped more than 20 per cent, cutting its market capitalisation to less than €600m. The bank responded by trying to reassure investors that its plan to boost capital by issuing €500m of subordinated bonds was still on track.

Piraeus was the worst performer in the European Central Bank’s stress tests of Greek lenders in April. After its capital ratio fell lower than rivals in the stressed scenario, it agreed a plan with regulators to raise €1bn of capital by issuing bonds and selling operations in central and eastern Europe.

Fears exist that Piraeus could find it hard to complete its planned bond issue because of general market jitters stemming from concern over the Italian government’s budget deficit plans and the fragility of emerging markets.