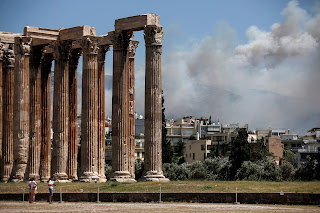 If you thought Greece’s ordeal was over, think again.

Months after exiting its international rescue program, the country faces renewed trouble in its banking system. There is no easy fix: money is short and investor patience thin. But it looks increasingly like the gradual approach pursued by Athens and the euro zone authorities is running out of steam.

Lenders still bear the scars of a decade of economic crisis. Borrowers are failing to meet payments on almost half of all loans, the highest ratio in the euro zone. A large proportion of banks’ capital is made of so-called “deferred tax assets” – future tax deductions accrued because of past losses – about which investors are skeptical.

True, there are differences in the health of the four largest lenders: Piraeus Bank SA is in the worst shape, while National Bank of Greece SA and Eurobank Ergasias SA are faring much better. But investors have little time for such subtleties: the country’s banking stocks have trailed their European equivalents by 32 percent this year. Even Eurobank trades at an unhealthy 77 percent discount to the book value of its assets.