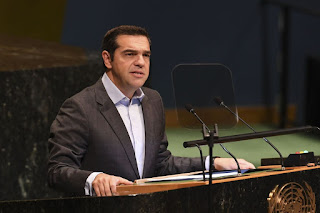 Greece’s Prime Minister Alexis Tsipras vowed to ratify a landmark pact with neighboring Macedonia regardless of domestic political risks, as part of a strategy to stabilize the Balkan region in cooperation with the U.S. and European Union.

Macedonians are expected to back the agreement with Mr. Tsipras’s government to rename itself “North Macedonia” in a referendum on Sunday.

In return, Greece, which has long objected to its neighbor using “Macedonia”—a name that dates back to the ancient Greek kingdom of Alexander the Great—has promised to lift its veto on the small country joining the North Atlantic Treaty Organization and, eventually, the EU.

Greek nationalists, including a small party in Mr. Tsipras’s left-led coalition, object to the pact. A vote to ratify the deal in Greece’s parliament could therefore split the government, leading to speculation that Mr. Tsipras might postpone the emotionally charged decision until after Greek elections next year, which he is not expected to win. He dismissed that speculation.