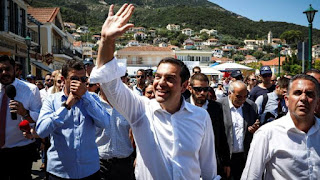 Alexis Tsipras, prime minister of Greece, has warned of “fresh battles ahead” as the country prepares its first budget measures following the end of its international bailout.

In his first public remarks since Athens’ exit from its eight-year rescue programme, Mr Tsipras said Greece was now free to “reshape its future . . . as a normal European country”.

The premier spoke on Tuesday on the island of Ithaca — consciously comparing Greece’s travails with those of the mythological hero Odysseus, who endured an arduous 10-year journey before reaching the island, according to Homer’s epic.

“Greece has lived through its own odyssey, including €65bn of austerity measures . . . We’re starting a new era today, with a sense of responsibility that Greece won’t return to the years of deficits and bankruptcy,” he said on state television, against a backdrop of the island’s picturesque port.