Only four economies have shrunk more than Greece’s in the last 10 years. Two of them have been hit by civil wars. 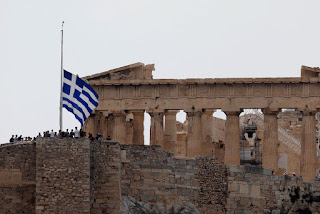 After eight years of bailouts, brinkmanship and even more bailouts, Greece’s economy is finally ready to stand on its own again. Well, what’s left of it.

The good news is that Greece really is about to wrap up its latest bailout program and won’t need any more financial assistance for now. But the bad news, as the International Monetary Fund points out, is that even with the lower interest rates and longer repayment periods that Greece has been given, it still has too much debt, too little growth and too fragile a private sector to be able to say that it won’t need more help for long.

Which brings us to the worst news of all: Europe might be celebrating this as a success story now, but Greece has been one of the biggest economic failures you’ll ever see short of a war or revolution.

Indeed, excluding microstates such as San Marino, there are only four countries that have grown less — or, more accurately, shrunk more — than Greece has in the last 10 years: Libya, Yemen, Venezuela and Equatorial Guinea. (The IMF doesn’t have numbers for Syria since the start of its conflict, otherwise it would probably be on this list as well). 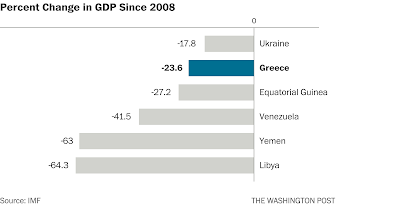 Posted by Yulie Foka-Kavalieraki at 5:41 PM