Greece’s eight-year odyssey shows the flaws of the EU 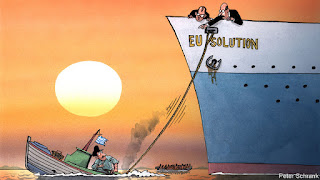 Kastellorizo is “the end of Europe—or perhaps its beginning”. So says Yannis Doulgaroglou, co-owner of the Hotel Kastellorizo, a sunny inn on Greece’s easternmost inhabited island. A tiny rocky outpost just off the Anatolian coast, on maps of Greece Kastellorizo is often relegated to an inset. Yet it was from the island’s picturesque harbour, on April 23rd 2010, that George Papandreou, the prime minister, stared blankly into a camera and acknowledged that his troubled country had lost access to capital markets and needed a financial rescue package from its euro-zone peers. The day is etched in the memory of most Greeks. Chuckling, Mr Doulgaroglou recalls the journalists who scarpered from his hotel once they realised the prime minister was saying something momentous, leaving behind their unpaid bills.

Eight years and three bail-outs later, as Greece prepares to leave its final programme on August 20th, Mr Papandreou’s remarks seem laden with pathos. He directed his ire at the “speculators” who had sent Greek bond yields soaring, more than at the successive governments that had overspent, under-reformed and fiddled the national accounts. Yet, he vowed, with a “common effort” Greece would “reach the port safely, more confident, more righteous and more proud.” He called this the “new Odyssey”.

More
Posted by Aristides N. Hatzis at 7:48 AM