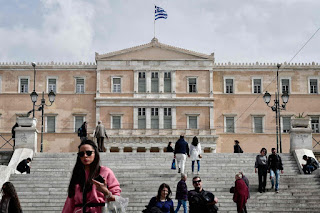 It took three bailouts, around €290 billion in loans from its European partners and the International Monetary Fund, countless nights of knife-edge negotiations, an avalanche of austerity, a collapse in output worse than America’s in the Great Depression, and three close brushes with an exit from the euro. On Monday Greece’s third bailout will conclude, and the country will no longer have to rely on its official creditors to finance itself.

The eight-year crisis leveled Greece’s old political landscape. Four general elections between 2012 and 2015 reduced the once-mighty Pasok party, which had led the country most of the preceding 30 years, to a single-digit also-ran. Syriza, a fringe group on the hard left that barely sneaked into Parliament before the debt crisis, has swept into power. Golden Dawn, a fascist party that polled below 0.5% before 2010, won 18 seats in the last election and is now entrenched in Parliament. Despite the criminal indictment of its entire leadership, it likely will finish third in the next election, which must be held by October 2019.

At the end of it all, the government and its European Union cheerleaders now argue that Greece is once more a normal country, on course for sustainable, inclusive growth. If only that were true.

More
Posted by Aristides N. Hatzis at 7:40 AM