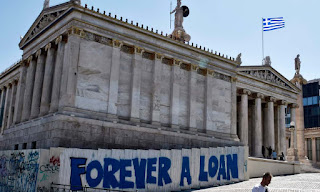 After eight years, Greece will on Monday be deemed strong enough to stand on its own feet. The international bailout programme that has provided Athens with emergency financial support will come to an end. Aside from the tough budget rules in place for the next decade or more, Greeks can wave goodbye to the troika – the officials from the International Monetary Fund, the European Central Bank and the European Union – that has in effect been running the country since 2010.

Beware the hype that trumpets this as a great success story, a tribute to solidarity and a commonsense approach that has restored economic stability and prevented Greece from being the first country to leave the euro. Nothing could be further from the truth.

Greece has been a colossal failure. It is a tale of incompetence, of dogma, of needless delay and of the interests of banks being put before the needs of people. And there will be long-term consequences. When Greece first received help in 2010, the plan was for it to have access to the financial markets within two years. It has taken two further rescue packages and six years for that to happen.