Greece Is Back on the Grid, But Recovery Remains Elusive 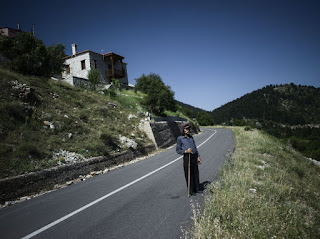 On August 20, the third aid package for Greece will end, marking the end -- for now -- of the country's debt crisis. But the country's slow economic growth and grim demographic outlook mean that even without the onerous rules attached to its repayments, it faces an uphill battle.

The school on the small Greek village of Kerasochori looks like the set of a disaster movie. Everything is still there: the black board, the math books, tables and chairs, the sports equipment, the map of Greece on the wall. Even the class registers are still in the corner. A layer of dust covers everything. About 20 boys and girls once went to school here, but 12 years ago it was closed down. That's where it began. There were no longer enough families in Kerasochori to keep it running.

Konstantina Kalli, 34, has unlocked the door and stands helplessly in the ruins of the past. "Anyone who leaves doesn't come back," she says. "The village is shrinking."

Kalli is Kerasochori's hope. She has a three-year-old daughter and is six months pregnant, with a girl. The birth will likely be difficult. There is no medical clinic nearby, and she has had to drive to Athens for every checkup, a journey of five hours by car along many winding mountain roads. Kerasochori doesn't have any child care. The nearest school is in the neighboring village, as long as there are enough children for it to remain in operation.

Kalli works for the local government, the biggest employer in Kerasochori. Together with two colleagues, a mayor, a priest and a police officer, she runs the district. About 100 people still live here in the village, most of them retirees. The average income is about 300 euros per month. There is almost no work -- the main sources of income are beekeeping and a bit of forestry. There's no tourism, even though, according to UNESCO, the air here is cleaner than almost anywhere else in Europe.