Greece exits its bail-out programme, but its marathon has further to go 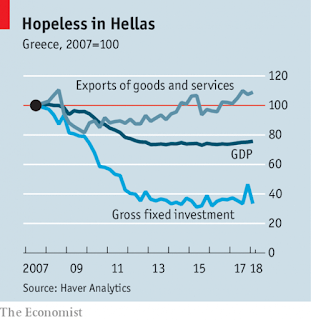 “No one buys furniture in a crisis,” laments Konstantinos Vourvoulakis. He and his father used to sell handmade furniture, but as customers became strapped for cash, they shut up shop in 2014. A chatty man with a sunny disposition, he started driving a taxi instead, ferrying tourists around Athens and offering travel tips. But he doubts he will be able to afford a holiday himself any time soon.

Greece’s public-debt woes triggered an economic collapse that lasted longer than the Great Depression in America. In 2009 the new prime minister admitted that budget-deficit figures had been understated for years, and were perhaps double those originally reported. Ratings agencies downgraded its debt. Interest rates surged. In 2010 the government turned to the euro zone and the IMF for help. Their loans had strings attached: that Greece implement deep spending cuts and structural reforms.

On August 20th Greece exits the last of three bail-out packages. Both its creditors and its government think its public finances have improved enough for it to borrow from the markets again. Debt relief agreed on in June helps cushion its return. The maturity of some loans has been extended, and interest-rate relief offered on others. A cash buffer of €24bn, enough to cover nearly two years of Greece’s funding needs, should also reassure investors.

But the public finances and economy have miles to go before they reach normality. Public spending is still severely restrained. The Greek government has signed up to exceedingly ambitious targets: primary surpluses (that is, excluding interest payments) of 3.5% of GDP until 2022—which only a few non-oil-producing countries have achieved in the past 30 years—and an average of 2.2% until 2060. In the early years, creditors will monitor progress every quarter.