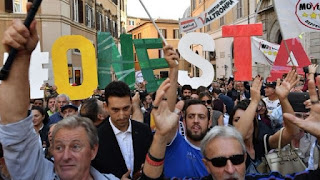 This is giving rise to celebrations in some official quarters in Europe that finally the euro crisis is over. As an example, Klaus Regling, the managing director of the European Stability Mechanism, says that he will be drinking a glass of ouzo to celebrate this important Greek milestone.

Evidently, Regling is not paying attention to two factors. The first is the extraordinarily sorry state in which Greece has emerged from its IMF-EU program as well as the country’s still very gloomy economic prospects.

The second is a brewing Italian financial and economic crisis that could have very much more serious consequences for the euro than did the earlier Greek economic crisis.