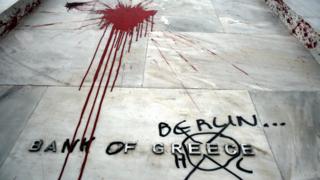 The government and its European lenders are keen to paint the end of the last bailout as a good thing, having avoided a "Grexit" in which the country would have crashed out of the eurozone into unknown territory.

But for many Greeks - especially the young - the damage has already been done.

A recent poll indicates that three-quarters of the population think the country is headed down the wrong path. The same number think the bailout deals, rather than saving Greece, actually harmed the country.

Taxes remain high and more than 90% of Greeks believe the lenders will keep a close watch on the country's spending for years.

More
Posted by Aristides N. Hatzis at 7:39 AM