The Fires in Greece 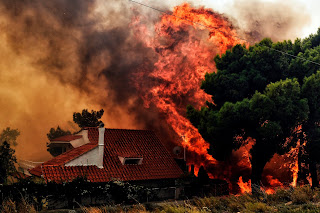 Four days after the wildfire that raced down from the mountains, incinerating all before it, cars were once again tangled up in traffic jams in this seaside resort’s narrow streets. Search parties combed ruined homes for bodies; volunteers sought out injured and frightened pets. The nation was in mourning, shocked by the magnitude of the disaster, shaken by the stories of victims and the missing.

In a V-shaped bend where on Monday desperate residents and visitors found themselves trapped, unable to escape the heat that melted even the metal of their cars, vehicles carrying survivors who had returned to salvage some possessions, volunteers, journalists and the simply curious edged carefully past one another as they sought a way out of Mati. The only reason they did not run the risk of being burned alive was that pretty much anything in the vicinity that could burn had already burned — pine trees, houses, people, pets and cars — even a wooden umbrella on a beach where people had fled into the water. Black dust and liquefied aluminum lay on the road when the incinerated hulks were removed.

By Friday, the death toll had reached 87, with scores still missing. It was unclear how many of the bodies had been identified, a daunting task because of the intense heat most had been exposed to.