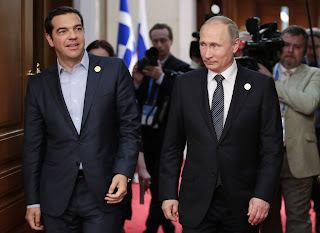 For centuries, even when Athens was a bastion of the West during the Cold War, Greece and Russia have seen themselves as natural allies. Both are Christian Orthodox nations on Islam’s western frontiers; even as a NATO member, Greece tried to maintain channels of communication with the Soviet Union. Yet a sudden dispute over alleged Russian meddling in Greek affairs has escalated rapidly. This could have long-term consequences for Greek-Russian ties and for the Western Balkans.

This month, Athens informed Moscow that it was expelling two Russian diplomats and refusing entry to two others. Among the accusations: the four were trying to stoke opposition to a recent agreement signed by Greece and a northern neighbor, the Former Yugoslav Republic of Macedonia, ending a 27-year dispute over the latter’s name.

Ratification by both countries would open the way for a renamed the Republic of North Macedonia to join NATO and the European Union. Greek opponents of the deal object to their neighbors’ use of “Macedonia” in any form, saying this implies claims on the Greek province of the same name; Macedonian nationalists object to adding a qualifier to their country’s name.