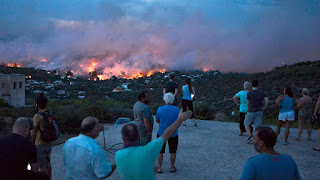 The devastating forest fires that have swept through crowded resorts on the Greek coast near Athens have killed at least 74 people.

The blaze, fanned by strong winds, raged out of control for a second day in eastern Attica, where more than 700 people were evacuated overnight in small boats. The fire service has also asked people to evacuate the area around Kineta, west of Athens.

Almost 50 wild fires have broken out across Greece in the past two days, with 10 still burning on Tuesday — including blazes in Corinth, Crete, and in central and northern Greece — after a weekend heatwave sent temperatures above 40C.

The number of fatalities makes this the highest death toll from forest fires in recent times and it looks set to rise further after a fire service spokeswoman said about 100 people were missing. More than 170 people have been injured. In 2007 more than 60 people were killed when a blaze devastated the southern Peloponnese peninsula. 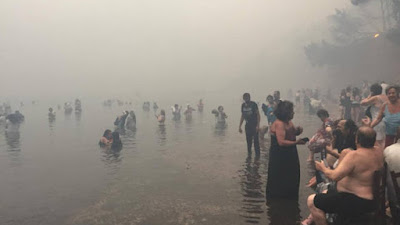