As Greek Wildfire Closed In, a Desperate Dash Ended in Death 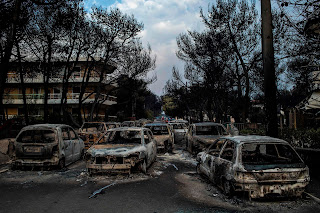 They nearly reached the water.

As wind-fueled wildfires that killed at least 76 people in vacation areas outside Athens bore down on their seaside resort, 26 men, women and children gathered in the hope that they could find the narrow path leading to a small staircase down to the water.

The gated entrance stood only a dozen paces away, but with smoke blotting their vision and choking their lungs, they appear to have lost their way. Officials found their bodies the next day, Tuesday; several were still clinging to one another.

At sundown, an eyeglass case, a belt buckle, the carcasses of dogs and the shells of cellphones dotted the still-smoldering field where they fell. Amid the burned pine cones and the naked trees, leaning as if slammed by a nuclear wind, lay a large leather sandal and a small blue one with a Velcro strap.

All around were the discarded blue rubber gloves of the emergency workers who carried the bodies away.

Greece, a country that understands tragedy all too well, woke Tuesday morning to its worst one in a decade. In addition to those killed by smoke or fire, or who drowned in the sea while trying to flee, 187 people were hospitalized, more than 20 of them children. Ten people remained in serious condition, the government said Tuesday night. 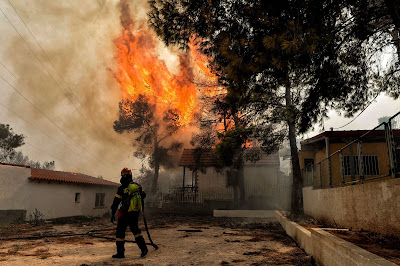 Posted by Yulie Foka-Kavalieraki at 8:09 AM