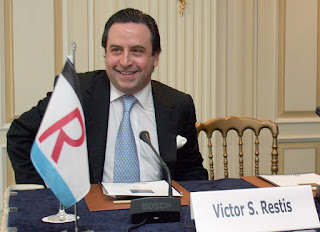 It is hard to understand how the Greek state works without grasping the power held by a small circle of industrialists and financiers in Athens. These are the oligarchs. Many inherited their fortunes or first accumulated them at sea; their fleets collectively comprise the largest merchant marine in the world. Then they moved into new spheres. Some went into construction. Others set up banks. Many own a line of hotels or collect blocs of real estate. Those with ships pay the minimal tax rate in Greece owing to legislation passed by the 1967-74 military junta that allows their capital to be assessed in vessel tonnage rather than profits. Sometimes tying their holdings through Cypriot or Liberian shell companies, oligarchs nevertheless stay based in Greece, where they compound additional advantages—bailouts courtesy of Greek taxpayers, lucrative state contracts—through blackmail.

With every new government that takes power in Athens, the oligarchs threaten to take away the jobs they provide and the cash they flush into the political system should any attempt be made to audit their assets or tax them more effectively. In the past three decades not a single major party in Greece has run for election without vowing to break the power of these men; not a single party has seriously attempted to do so once in office. What is more, oligarchs are able to control the narratives told about them because there hardly exists a newspaper, television channel, or magazine in Greece that is not owned by one of them. Their power is such that press outfits within—and outside—the country have many legal and financial incentives not to call them out by name.