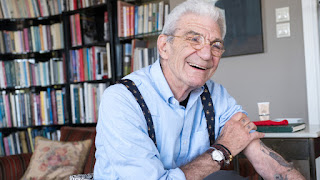 Framed by two tall windows that dominate the living space in Yiannis Boutaris’ eighth-floor apartment, the Aegean Sea glitters in midday tones of indigo and silver. Boutaris, who is the mayor of the northern Greek city of Thessaloniki (known to its residents as Salonika), points towards a landmark on the horizon: Mount Olympus, the mythical home of the Greek gods where Alexander the Great offered sacrifices before setting out to conquer Asia.

“I couldn’t get away from this view even if I wanted to,” he says. “I see it every day from my office, too, but I haven’t got tired of it. Even though I come from a mountain town I like to live as close as possible to the sea.”

We sit down at a black-lacquered dining table, where Boutaris serves mugs of strong black coffee and a plate of miniature cheese pies, a Salonikan speciality, under the gaze of a female mannequin dating from the 1970s. The near-life-size figure is part of his collection of kitsch, which amounts, he thinks, to almost 6,000 pieces. “I started collecting it because I saw beauty in its ugliness,” he says. “I got into the habit of picking up small items from souvenir shops everywhere I travelled to. The larger pieces come from Greek junk shops and flea markets.”