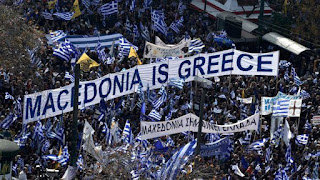 Greek MPs will debate a motion of no-confidence in the leftwing Syriza-led government on Friday after Alexis Tsipras, prime minister, agreed a deal to rename the country’s neighbour as North Macedonia to try to end a decades-old dispute.

The move, triggered by the conservative New Democracy opposition party, is part of a growing backlash against the accord announced on Tuesday by Mr Tsipras and Zoran Zaev, his Macedonian counterpart.

The announcement followed five months of negotiations assisted by a UN special mediator but feeling is strong in both Greece and Macedonia over the issue. Resentment is especially strong in the northern city of Thessaloniki, capital of Greece’s own region of Macedonia and a stronghold of nationalist sentiment over the name.

Some Thessalonikans claim that their Slavic neighbours should be punished for “usurping” the name and heritage of the ancient Macedonian kingdom based in northern Greece and its warrior king, Alexander the Great, even though the region benefits from trade and tourism with Skopje.

More
Posted by Aristides N. Hatzis at 8:01 AM